From idea to publication 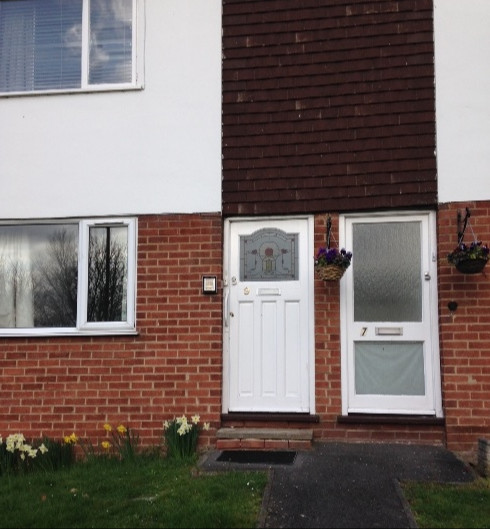 Asking ‘why?’ is a great way to come up with a story plot – and visual images can trigger plenty of ideas too. When you bring the two things together, the creative juices really begin to flow.

This happened to me a while back when I was walking my dog past a flat not far from where I live. It was part of a warden controlled block for people over sixty which, from the architecture, I’d say was built in the early 1970s. So, when I spotted the door at number 9 (see photo above), I immediately began to wonder… why? The door has obviously come from a house built in the 1930s – the style of the door and the stained glass in the panel were quite distinctive. So why had a door from the 1930s been fitted to a property built forty years later?

Once I’d asked ‘why?’ my imagination started to come up with possible explanations. I knew that the flats were for older people, so maybe the owner of the flat had a sentimental attachment to the door. And that’s when I came up with a story called Moving On, which went on to appear in a 2014 edition of The People’s Friend Special. It’s a story about a woman who downsizes from the home she’s lived in for almost fifty years and how her family help her to come to terms with the move.

Asking ‘why?’ is one of the easiest ways to generate ideas for short stories. Ask yourself the question and then make up your own answers. You don’t have to settle for the first explanation you come up with. In fact, the best stories often come from the ideas that are less obvious or a bit unexpected.

Most writers are naturally curious, and ‘why’ is often the most useful question to ask, but don’t neglect the other four ‘Ws’. Ask yourself:

Use the five ‘Ws’ whenever you’re stuck for a story idea. They’ll get your imagination working and, before you know it, you’ll be making a start on your next piece of short fiction.

Jane Bettany is the author of In Cold Blood, a crime novel published by HQ (HarperCollins) featuring DI Isabel Blood and set in the fictional Derbyshire town of Bainbridge. The book won the 2019 Gransnet and HQ writing competition, which was for women writers over the age of 40 who had written a novel with a protagonist in the same age range.

In Cold Blood is Jane’s first novel, but she has been writing short stories and non-fiction articles for over twenty years, many of which have appeared in women’s magazines, literary magazines, newspapers and online.
Jane lives in Derby and has an MA in Creative Writing.